France vs Ecuador: Draw enough for Les Blues to win the Group

France wrapped up their group stage round by playing out a scoreless draw with Ecuador.

Didier Deschamps decided to rotate his squad as the qualification was all but sealed in the 5-2 destruction of Switzerland and needed only a draw to top the group.

Ecuador on the other hand could only do with a win to qualify for the next round and pray that the Swiss would lose to the whipping boys, Honduras.

Digne, Koscielny, Sagna, Schneiderlin all got a start for the French in the game as Deschamps was looking to keep his starters fresh for the round of 16 clashes.

Benzema has the highest chance to score in this game on some betting sites, you can also look at online betting site bonuses.

Ecuador meanwhile fielded a largely unchanged squad from their win against Honduras.

France played a 4-3-3 with workhorses Pogba, Matuidi, and Schneiderlin in the deeper roles and Sissoko, Benzema, and Griezmann starting in the attacking band of three.

Koscielny started for the rested Varane and Sagna got a start ahead of Debuchy.

Ecuador started with a flat 4-4-2 on the other hand.

The game got off to a very sluggish start and the French were playing the game at their own leisure as they had no reason to display the aggressiveness and urgency that characterized their impressive wins over Honduras and Switzerland.

But this didn’t mean there was a lack of fireworks with plenty of ugly challenges flying in from both sides.

Ecuador’s Noboa had a nasty cut to his head while Blaise Matuidi played the game limping after a hard tackle on him.

Late into the first half, there were chances for either team, but neither of them was able to take them.

Firstly, Paul Pogba was able to escape the attentions of the defenders and managed to get a powerful free header on target, but the Ecuadorian custodian Alexander Domínguez reacted quickly and tipped it over the crossbar.

A couple of minutes later, striker Enner Valencia rose high to met a cross but Lloris was more than up to the task and made a good save to deny the Ecuadorian striker.

Alexander Domínguez had an impressive game in between the posts for Ecuador as he denied the French a third win.

The second half got off to a much better start and the French almost got their goal with the first play immediately after the restart. 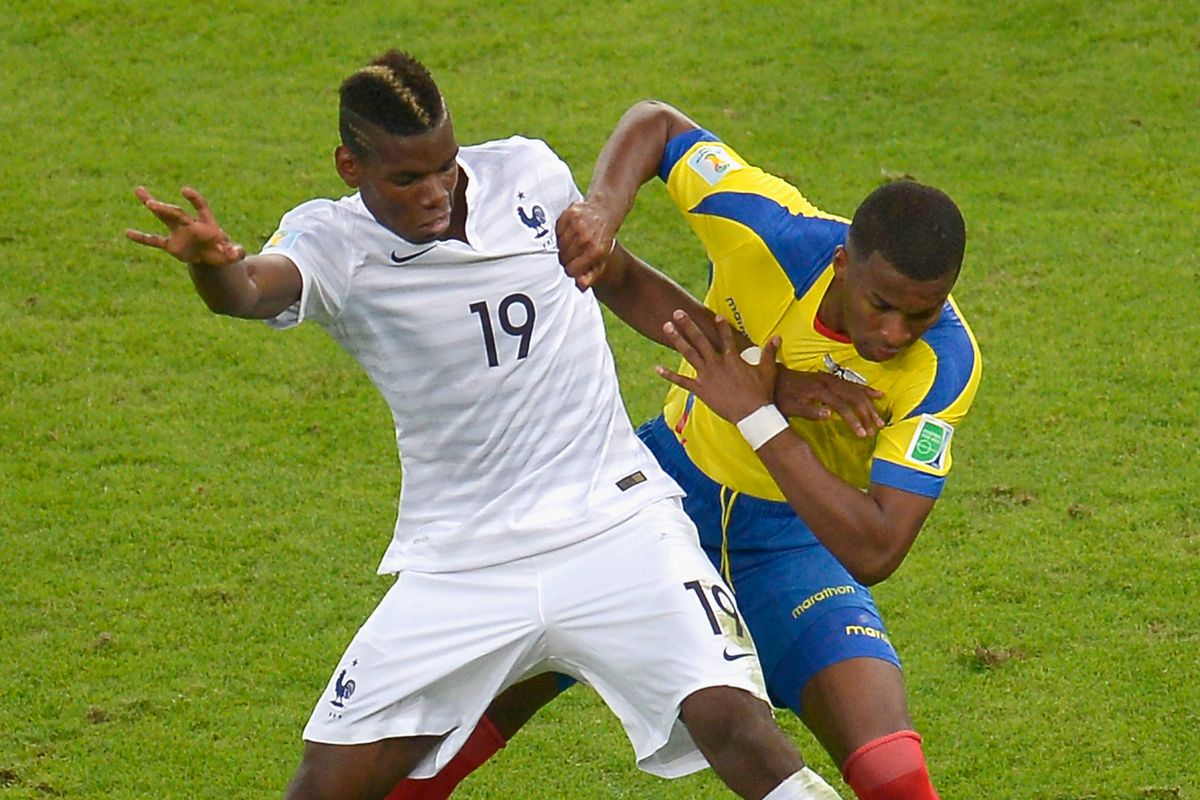 Sagna’s pinpoint cross found Griezmann in the box and his shot was saved miraculously by Domínguez as he continued his heroics in the goal for Ecuador.

The talking point of the game occurred at the 50th minute as United winger Antonio Valencia was sent off for a reckless tackle on Lucas Digne.

He completely missed the ball and lodged his studs into Digne’s leg.

The ref appeared to be in a dilemma bu, in the end, made the right call and sent Valencia off which effectively ended Ecuador’s hopes of qualifying for the Round of 16 for the second time as the Swiss were cruising to a victory at that time in the other game.

From then on, Ecuador shut shop and played for damage limitation and successfully achieved it as the final score indicates.

Domínguez meanwhile denied Benzema, Griezmann, and Giroud as he came on and was the last man standing between a draw and a French victory.

He was undoubtedly the man of the match and made as many as 10 actions that stopped a goal directly or indirectly.

But in the end, his effort counted for nothing as it didn’t have any effect on the final standings of the group.

As for the French, they’ll be very happy with their campaign this far after barely scraping into the world cup via a playoff win over Ukraine.

They’ll now be looking forward to taking on Nigeria and continue their impressive performances.

If they keep playing as they did in the group stages, there is no reason why they can’t make it to the final or even win the tournament.

Any cookies that may not be particularly necessary for the website to function and is used specifically to collect user personal data via analytics, ads, other embedded contents are termed as non-necessary cookies. It is mandatory to procure user consent prior to running these cookies on your website.